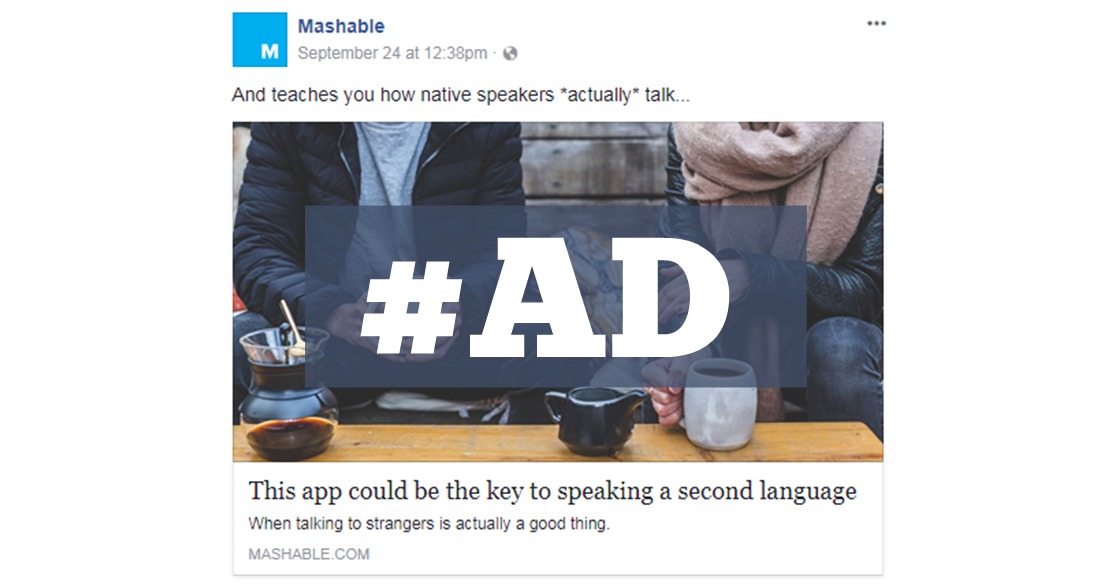 The other day I saw an “article” posted by Mashable on Facebook. The title was “This app could be the key to speaking a second language” and Mashable had added “And teaches you how native speakers *actually* talk….” I’ve been considering learning Spanish so I was really curious to see what this app might be and if it would be better for me than the Rosetta Stone I have been contemplating.

I clicked on the article and started reading about uTalk Language Education. It was a glowing review. And yet, it was only 3 short paragraphs, with the last one being nothing but a plug for how you could get a subscription for 69 percent off. I thought to myself “this reads more like an advertisement than a product review.”

Sure enough, as I scrolled back to the top of the post, I saw this: “Just to let you know, if you buy something featured here, Mashable might earn an affiliate commission.” How in the world did I miss that when I first read the article? Here’s what it looked like:

Under the FTC rules (which I study and post about on a regular basis), this is probably an adequate disclosure. It was before the post. It was noticeable. It was in language that I understand. It was totally my fault for skimming over it.

And yet, between the disclosure itself and the way that the article was written, I was so mad that I decided I didn’t even want to click through to the product because I felt cheated out of a “real” article.

Why Did I Feel Cheated and What Would Have Made It Better?

I think in part, I expected that something posted like “news” on Mashable wouldn’t be a blatant advertisement. That was the first strike. The second was that in doing so, Mashable didn’t even make an attempt at reviewing the product. They probably took uTalk’s product information page, pulled out a few important points, and regurgitated them. They didn’t actually try the product. They didn’t give pros and cons. They didn’t compare it to any other products on the market.

It was a pure sales pitch, plain and simple–disguised to look like news.

I know Mashable isn’t the only one doing this. I’ve seen so many PopSugar wine club “reviews” that are nothing but advertisements that I have stopped following PopSugar altogether. Of course I can’t help feeling a bit hypocritical given that I am one of the people writing blog post product reviews with affiliate links in them.

It’s a good lesson to me and to all of us who write articles like this. A few lessons, in fact:

Ironically when I went back to find the article later to write this post, I did click through the link. It took me to a “Mashable Shop,” so clearly they aren’t trying to trick the reader into thinking that they aren’t making money. It wasn’t a traditional affiliate link, but it was the same concept.

How would you have felt if you clicked through to read “news” only to find out it was advertising? Or do you assume that all posts on Facebook now are as likely to be ads as they are newsworthy?