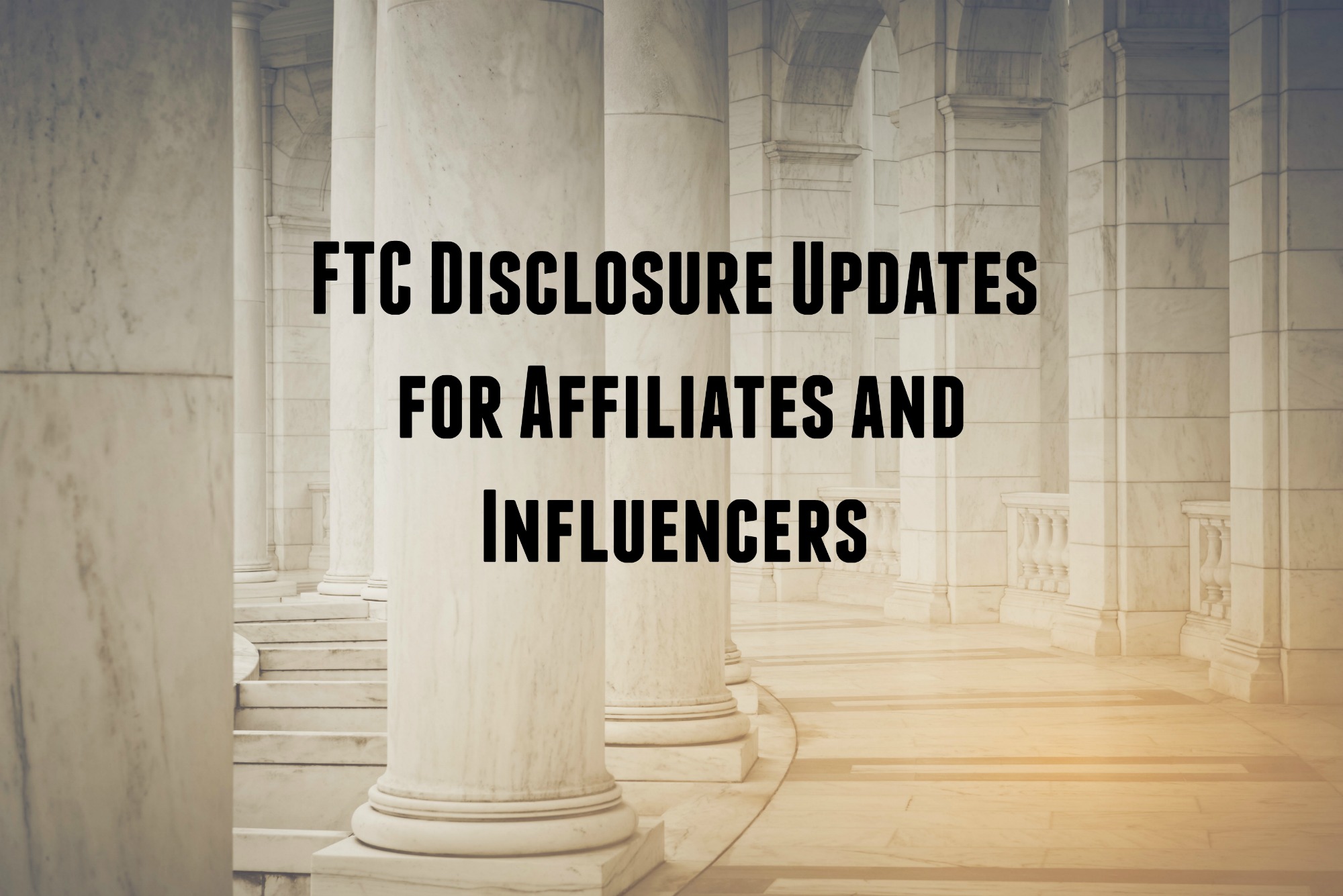 (Updated 6/10/22) In 2013, the Federal Trade Commission (FTC) first updated its guidance for advertising disclosures in a guide called .com Disclosures: How to Make Effective Disclosures in Digital Advertising. The original guidance from 2000 left open many holes including advertising on mobile devices and places like Twitter and Facebook. Since then, the FTC has clarified much of what it originally wrote.

May 2022, the FTC proposed changes to the Guidelines. Read my full post on that and I will update this page once the actual update is passed. Comments will be taken through August 2, 2022.

On October 13, 2021, the FTC announced that it has put hundreds of businesses on notice about endorsements. The Notice of Penalty Offenses warned that the companies could incur a civil penalty of up to $43,792 per violation. One of the violations specifically mentioned was failure to disclose a connection between an endorser and the seller of a product if the connection might “materially affect” the endorsement and the connection would not “reasonably” be expected by consumers. See the list of the 700+ companies that were put on notice. It does NOT mean they were in violation but rather that they have been formally made aware of the rules.

On February 3, 2020, the FTC announced a settlement with an operator of a comparison shopping website. The publisher essentially ranked and reviewed financial products and received compensation from the reviewed companies. The publisher claimed the website information was “objective,” “accurate,” and “unbiased” but in fact ranked some of the financial companies based on the amount of compensation they received. A disclosure in the footer as well as a small disclosure link with popup higher on the page were not sufficient. The biggest takeaway from this settlement was that the publisher was found liable and had to pay $350K.

Furthermore, Commissioner Rebecca Kelly Slaughter said this in a Concurring Statement: “Companies that engage in pay-to-play rankings and ratings should take heed: This conduct robs consumers of vital information, pollutes our online marketplaces, and violates the law, which will result in serious consequences.”

On November 5, 2019, the FTC released a new “brochure” for social media influencers. “Disclosures 101 for Social Media Influencers” is a very basic look at disclosures with lots of pretty pictures. In true influencer fashion, they even released videos to help explain it in plain language. Although there isn’t really any new information in the brochure or the videos, a couple of things were made clear:

The FTC held a Twitter Chat on September 20, 2017 to answer questions about influencer disclosure. Click here to read my full notes on that chat. Here are a few highlights:

The FTC Updated its Frequently Asked Questions on September 7, 2017 to help clarify some of the questions in the guidelines. Highlights from that update:

How do these pertain to affiliate marketers?

The guidelines themselves are not particularly instructive, but the examples at the end of the guidelines are extremely helpful.

Example 14 in the guidelines is very similar to the types of recommendations that we do in blogs posts and across other media:

This is very similar to the Twitter or Facebook posts that most of us in affiliate marketing make. The FTC states that this Tweet would need two different disclosures: one that JuliStarz was getting paid for the endorsement (which would include affiliates) and the second as to the actual health claims being made not being typical.

Here’s the rewrite suggested by the FTC:

The rewrite suggests placing “Ad” at the beginning of the Tweet. Further examples say that it is not enough to write in one place that you are being compensated and then not later refer to that compensation when you do the actual endorsement. The disclosure and the endorsement must be right next to each other. In addition, using “#spon” after the endorsement is not sufficient because consumers may not understand that “#spon” actually means “sponsored by an advertiser.”

Added: Here is more specific guidance previously from the FTC on the term “endorsement” where they do specifically implicate “affiliate marketing.” Important to note:

The FTC isn’t mandating the specific wording of disclosures. However, the same general principle – that people get the information they need to evaluate sponsored statements – applies across the board, regardless of the advertising medium. The words “Sponsored” and “Promotion” use only 9 characters. “Paid ad” only uses 7 characters. Starting a tweet with “Ad:” or “#ad” – which takes only 3 characters – would likely be effective. (May 2015 FAQ)

Especially when you combine this with the Cole Haan Closing Letter regarding contest disclosure on Pinterest. The FTC is clearly including Pinterest in the disclosure guidelines.

A group called Public Citizen sent over 100 examples of Instagram posts to the FTC, complaining about the lack of disclosures. The FTC reviewed them and then sent more than 90 letters to “influencers and marketers” reminding them about the disclosure guidelines. A sample letter was released stating that disclosure needs to be made in the first 3 lines of the text because not all consumers will click on the “more” button. The FTC also stated in its press release that the following are not sufficient: “#sp”, “Thanks [Brand]”, and “#partner”.

As of September 2017, the FTC has followed up with warning letters to over 20 social media influencers who are continuing to violate the law after having been “educated” once already.

On November 13, 2018, the FTC announced a settlement agreement with a PR agency over 2 Olympian influencers not properly disclosing on Instagram. (Key Takeaways from New FTC Disclosure Settlement) They also seemed to indicate again that “Thanks” was not sufficient.

You may also want to read:

Blogger Involved in FTC Lawsuit for Failure to Disclose: This is one of the biggest applications of the Guidelines so far. Both merchants and bloggers need to read my post on this case because it reiterates in practice much of what I said above. The merchant and the agency were held liable for the blogger’s failure to disclose. This was a paid placement rather than an affiliate relationship, but the principles are the same.