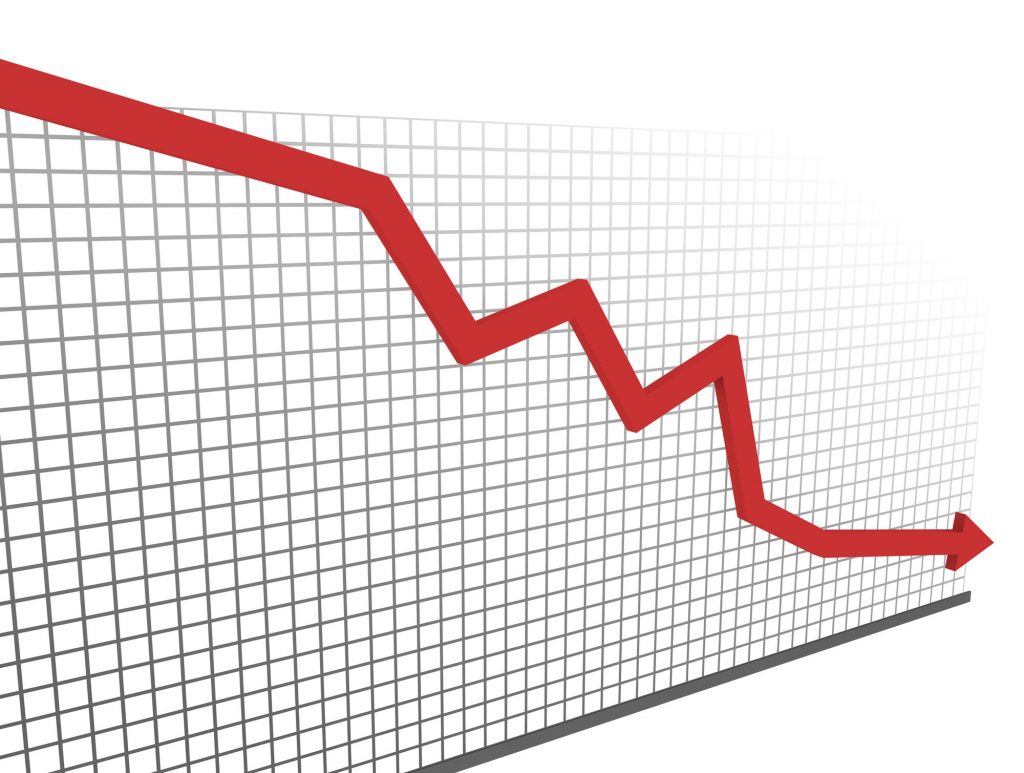 Last week I wrote an article for the PMA entitled Affiliate Marketing and ITP 2.0. It was a basic overview of ITP 2.0 and the impact it can have in general on affiliate marketing. I want to take that a step further and show affiliates just what is at stake and how they can help prevent it.

If you make any money in affiliate marketing,
you need to read and understand this post.

I’m not sure how much more emphatic I can be than that. There’s a good chance you are going to start losing commissions as early as this afternoon, depending upon when the Safari update takes place (now we are hearing perhaps September 24?).

Because Safari is the default browser for Apple products such as iPhone and iPad, this change is going to affect your traffic significantly.

Here are the steps you need to be taking.

Step One: Assess the Possible Impact to Your Site

The first thing you need to do is check your analytics to see how much of your traffic is Safari traffic. The easiest place is through Google Analytics. I’m not an analytics whiz, but you only need a basic understanding to figure this out.

Go into “Audience” “Technology” “Browser & OS” and look at the list for the last 30 days. You don’t even have to do the math–Google does it for you. You’ll see Browsers broken down. Add together anything Safari as a MINIMUM, but also know that Firefox is rolling out something similar soon.

As you can see, for one of my sites, my Safari plus Safari (in-app) are a total of 16%–not a huge amount of my traffic. 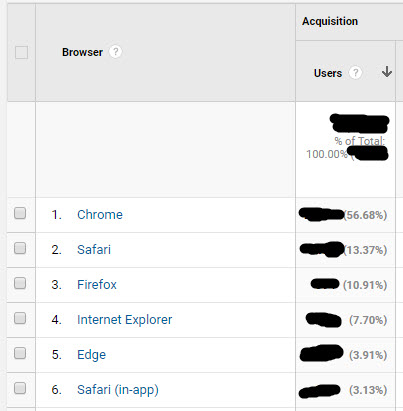 But the news is much worse for another one of my sites where Safari traffic alone is 44%. Safari plus Safari (in-app) plus Firefox account for 51% of my traffic on that site. 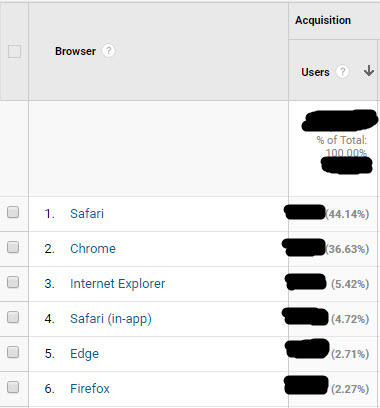 That means between 44% and 51% of my third-party tracking cookies may be dropped in the next few weeks.

If you are up for a little math, some networks will show you the browsers used for your transactions. For example, in CJ you can run a transaction report and add the columns “Concluding Browser” and “Initiating Browser.” Run the report, export it, and total up your commissions for each browser type. Then you will know the percentage of actual commissions you are receiving through Safari transactions. 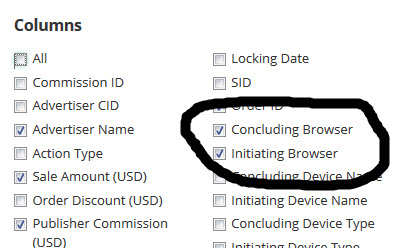 Step Two: Check With Your Merchants

The next step is to start checking to see if the merchants you are working with have updated their sites to be compliant with the new standards. A lot of merchants are making changes by the hour. The easiest way to know if they are compliant is if they tell you. However, I’ve only had 2 merchants (out of about 1000) tell me that they are. The next best thing is when a network helps you find that information easily.

In ShareASale, merchants are now being marked when they become compliant so you can easily look for yourself.

Jane was one of the first merchants to reach out to me that they are compliant and sure enough, you can see their account flagged in ShareASale with a green flag and the words “ITP COMPLIANT”:

If the merchant isn’t on ShareASale and other networks don’t start adding these flags, your only choice is to reach out to the merchant or the OPM and ask them if the changes have been made. So far I have been having luck with that, even if the merchant’s response was a date by which they hope to be done.

Depending upon how many merchants of yours are compliant by the time the update is rolled out, you have a couple of choices on what to do.

First, drop the merchants that are not compliant if you can easily replace them with merchants who are. How much it is worth to you will depend upon how much of your traffic you figured out is Safari and what percentage of your sales come from the non-compliant merchants. If it isn’t a lot or if they have responded that their changes will be made very soon, it may not be worth changing out the merchants.

Second, alert your customers to the change. This obviously won’t work for every site but will work in specific circumstances. For example, as a loyalty site, I can tell Sunshine Rewards members that they will not get their cash back if they continue to use Safari. This will prompt them to use something else when they do their cash back shopping. It is only a temporary fix until other browsers implement similar cookie dropping policies. But it may buy me time until my merchants do become compliant.

Third, negotiate with your merchants who are NOT compliant for some type of make good (some tips on how to negotiate a better affiliate deal in general). You can show them what percentage of your traffic is Safari. Use that data to come up with a fair number that the merchant will use to compensate you for based on your overall sales. For example, you will receive a 20% bonus at the end of each month to account for the untracked sales.

Is This Really a Big Deal?

Assume for the sake of argument that the ShareASale Top 100 list is representative of all merchants. In actuality, they are probably better managed than most merchants and more likely to be following issues like this. But let’s just use them as the best case scenario.

If the Safari rollout happens today, I will see an immediate drop of 34% in my affiliate revenue.

Let that sink in. That’s basically my company losing 10% of its revenue when Apple flips a switch. Are you prepared to lose 34% of your revenue?

Obviously, these numbers are going to get better over time as more merchants become compliant. However, they will also worsen when the other browsers make their changes. Can you afford to go into Q4 not taking measures to protect your affiliate revenue?